Pre-planning as an act of love and responsibility We are always very encouraged by caregivers who were willing to share their stories with us so that more families who may be in need can benefit from our trust services. Mdm Zalina is one of such caregivers who is so brave and big-hearted to share her personal story.

Like many caregivers of persons with special needs, Mdm Zalina is worried about the future care of her 2 sons, Aziz and Raziq, both with autism. Although Mdm Zalina has 2 other older children to take care of Aziz and Raziq, she does not want to burden them financially in the future. She recognises that it is the responsibility of parents to make arrangement and plan for the future care needs of their sons with special needs.

During the initial planning process, Mdm Zalina and her husband had the following concerns:

In 2009, Mdm Zalina and her husband chanced upon SNTC online. Aziz’s case was also referred to SNTC by Rainbow Centre with parents’ consent. They realised that SNTC’s non-profit trust infrastructure was suitable and fulfilled the criteria of what they had been searching all along.

Even though both Aziz and Raziq are still relatively young, Mdm Zalina and her husband have made considerable arrangements for them and ensured their financial security. Such forward-thinking amidst heavy caregiving responsibilities is truly admirable.

We hope that Mdm Zalina’s journey will encourage more caregivers to take the first step in planning for their loved ones with special needs. 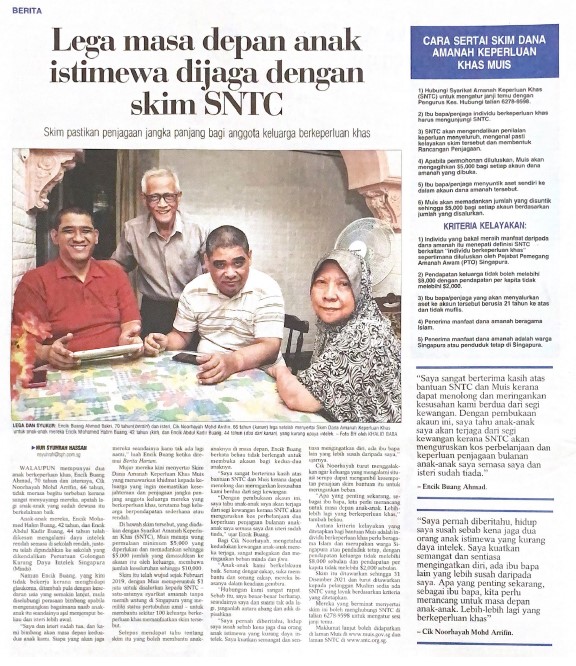